Primary 4 had a wonderful morning at the National Museum of Scotland where they attended a presentation called ‘So you want to be a Viking?’. The children made an excellent audience and were keen to answer any questions set by the presenters. Frank volunteered to solve a message that was written using runes. Afterwards we were very lucky to have a session with the Viking handling box, where we could investigate artefacts made and used by the Vikings. It was very interesting. Finally,  we had a chance to view the Viking exhibits on display in the Early People gallery. At the Viking grave exhibit we were able to identify many of the objects at the plot but couldn’t work out why the Viking had been buried without his feet !

Primary five were fortunate enough to attend a workshop by the Edinburgh Science Festival. They learned about how electricity works and flows and had the chance to use scientific equipment to generate power. Afterwards, they used this power to race hexbugs around a track. Everyone really enjoyed it and were excited to have the chance to perform their own experiments. 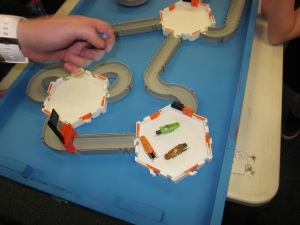 VISIT THE CHILDREN AND FAMILIES BLOG